Data collection began in 2014 with a population-based sample of 4,097 twin families. The cross-sequential survey design (see Figure 2) contains four twin birth cohorts with ~1,000 same-sex (both monozygotic and dizygotic) twin pairs in each cohort.

On the one hand, these mixed modes ensured the most suitable assessment strategy for each question type, i.e. more sensitive topics were covered via CASI. On the other hand, they allowed a certain degree of flexibility for the interviewer in order to minimize the total interview duration in the households.

School reports and developmental check-up reports were scanned as part of the CAPI and encoded afterwards. 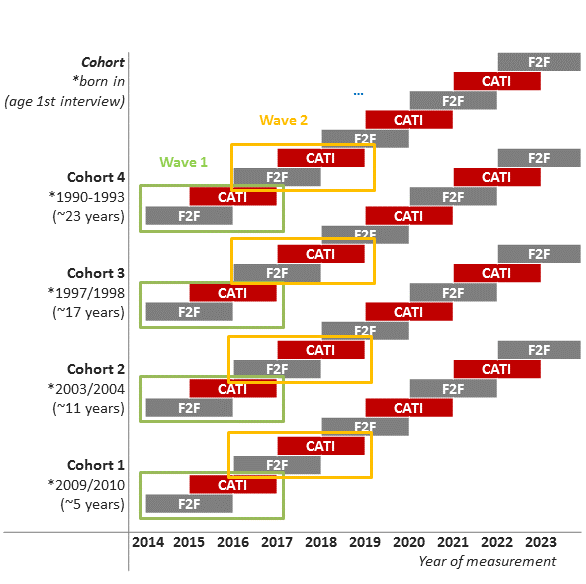 The cross-sequential structure is combined with an Extended Twin Family Design (ETFD, see Figure 3). The sample contains not only monozygotic and dizygotic twins, but also their biological, adoptive or foster parents, one biological, adoptive, or foster sibling (if available), as well as (if applicable) stepparents and partners of the twins. Thus, the ETFD captures both the biological family of the twins as well as the environment the twins live in.

There are two characteristics of data collection and sample composition, which are briefly explained here.

When the study was implemented, two subsamples of the initial age cohorts (consisting of twins aged about 5, 11, 17, and 23 years) were drawn, which were born in consecutive years (see Figure 2). This was necessary to achieve a sufficiently large sample size for TwinLife based on the target population of twin families in Germany.

Identifiers for the two subsamples are recorded in variable wav0100.

Face-to-face interviews (F2F) are carried out biennially in TwinLife. In the year between, a part of the sample is surveyed via telephone interviews (CATI). The main purposes of the CATI interviews are: 1) keeping in touch with the participants, 2) updating the contact information of the families (tracking), 3) collecting some complementary data that could not be surveyed in the face-to-face interview due to time restrictions, and 4) keeping track of important life events and transitions. Therefore, each F2F data collection together with the consecutive CATI data collection including both subsamples a) and b) is defined as one survey wave.

Usually, there is one data release each year, including new data of either a F2F or a CATI data collection for both subsamples.
For further information about the TwinLife sample and sampling design, please take a look at the ➔ methodology report of the first wave (Brix et al., 2017) and the corresponding ➔ article (Lang & Kottwitz, 2020). Methodology reports of all data collections including a fieldwork description and outcomes can be found at the ➔ Downloads section of TwinLife’s documentation website.